Reference photo -door 212 by aunt Owee,which is a creative commons image. Thanks,Owee. I’ve tweaked the photo a bit . I had loads of fun painting this one and am happy with the way it turned out,which is not often.My photo of the painting somehow doesn’t capture the vibrancy of the red colour ,so I guess I need to work on taking better photos.Till then,I have to make do with pics taken by others. I am looking for pictures of doors, bells,landscapes,flowers, people and windows(make than any interesting subject ;-)) to paint from. If you have a photo you can spare, I would love to paint from it. Of course,you will be credited for your photo..Thanks!. More doors to follow soon..

Not been able to paint in the last few days because of some work .Posting some old stuff.This is a 8X 10 acrylic on canvas painting I did as a part of the Indian summer series(The first one was the Sunflower girl).

Batik painting on cloth stretched on wood. Done in 2009.

Latest addition to the shop is this coy(maybe a little sad too) bride. Painted her with my wedding pics as reference.No,she doesn’t look like me,but wears the sari and jewelery I got married in;-).

I’m going to be completing 3 years in blogland soon and am planning a giveaway. Other than that it’s sweltering hot here and creative juices are drying up from all the heat ;-).. Oh, watched this movie Tanu Weds Manu and have a huge crush on Maddy(Madhavan). The movie itself is no great shakes, just a timepass flick. And,if Kangana Ranaut could stop acting,it would be a great boon to humankind.She’s wooden,screechy and generously grates on the nerves.

Have a fab Tuesday ! 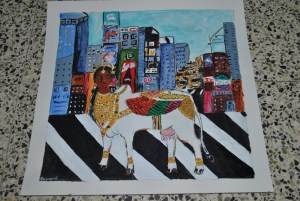 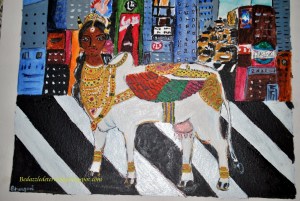 Kamadhenu in the city. Acrylic on paper.

Sometimes when you go looking for something,you end up getting something else. A scavenger hunt at the local waste paper Shop lead me to this magazine. I was not exactly looking for images of Indian Gods,but the shop had only a tonne of religious mags.Somehow,the image spoke to me and wanted me to take it home..

I wanted to use the picture of Kamadhenu in a collage,but didnt have the heart to cut it out,so opted to paint it instead,but with a little twist.Art has made me realise something about myself-that I always make the most torturous, circuitous interpretations of things , that I can never get myself to paint something realistic and that I am a fantasy-addict more than anything.The painting originally was supposed to have Times square as the background,but ended up as some mish-mash city. A few things like the JVC and Coke bottle adverts are all from Times Square.The rest has a more Chennai-feel to it. The yellow things in the background are autos(Chennai’s own solution for torture). The size is larger than I normally prefer,but I am consciously trying to scale up images on bigger sized canvases.

A little about Kamadhenu(lifted right out of Wiki ;))

“Kamadhenu (Sanskrit: कामधेनु [kaːməˈd̪ʱeːnʊ] Kāmadhenu), also known as Surabhi (सुरभि Surabhī), is a divine bovine-goddess described in Hindu mythology as the mother of all cows. She is a miraculous “cow of plenty” who provide her owner whatever he desires and is often portrayed as the mother of other cattle. In iconography, she is generally depicted as a white cow with a female head and breasts or as a white cow containing various deities within her body. All cows are venerated in Hinduism as the earthly embodiment of the Kamadhenu. As such, Kamadhenu is not worshipped independently as a goddess, and temples are not dedicated to her honor alone; rather, she is honored by the veneration of cows in general throughout the observant Hindu population”

Have a super weekend..

Baggage.. Big ones,small ones,Hang-ups,nasty ones,hurtful ones..Don’t we all carry some unhealthy attitudes,ideas and opinions inside our hearts? That is theme for this collage(3rd in the Penn series). The Octopus on the girl’s head signifies the stronghold such baggage has on us. I’ve used acrylic paints,water colours,pens, wax crayons and charcoal pencil on this one. Collage elements are from a glossy women’s magazine..I sold the prints I had made ,but the original is still available.Size: A4.Done on cartridge paper.

4th in the Penn series,the inspiration for this was the picture of a lotus pond i saw in a magazine. the deer and the woman’s headgear fitted well for the series. Acrylic ,pens ,wax crayons on paper.The original is available.

“Penn” means woman in Tamil.I am doing a series of Mixed Media Art paintings on Indian women in different situations. Sneak peak of two of the paintings from that series.

“Sumati “. 8X11.5 Acrylic and pen on paper. Embellishments,decoupaged elements on a newspaper background. Sumati is a prototype of a “Perfect Tamil” girl in terms of physical appearance(a rare breed these days). Sumati’s proportions and facial features are slightly distorted to give a whimsical feel.

I’m working on getting giclee prints of my work and will soon be listing them on my Etsy shop.. Yeah,I’m going Etsy!.Just waiting for some issues to be sorted on my Paypal account. Next instalment of more in the series soon.